Gello is married with two beautiful children, who can be heard on air, embarrassing their dad from time to time. Gello has had successful ratings in all of the time slots he has occupied ever since he started his career in radio. From nights to afternoons, middays, and mornings! His highly rated morning show led to him being recognized by AZ Foothills Magazine, naming him “Best Local Radio Talk Show: Morning Drive (May 2017)”. The Michigan Association of Broadcast has also recognized Gello’s exceptional community work, honoring him with the Merit Award for community involvement.

When Gello isn’t working. You can find him creating Tik Toks, cheering for his son at his Football games, filming and editing his next viral video, or taking his family to the latest WWE event! Meilani is originally from Stockton, CA, where she first began her radio career at the age of 18 with KWIN 97.7/98.3. Meilani worked her way up in radio starting in the Promotions Department and shortly after On Air. Her radio career first started with Overnights, Weekends, and then ultimately Middays. Later, her career evolved by moving to Phoenix, AZ where she hosted a #1 Night Show for KKFR Power 98.3/96.1. Meilani loves connecting with her listeners and radio continues to be an internally rewarding passion for her.

Additional passions include Polynesian dancing and cooking. She is an award-winning Tahitian Dancer who loves sharing recipes on her YouTube Channel “Meilani Life”. Meilani comes of Polynesian descent, so cooking, eating and dancing are all a must. 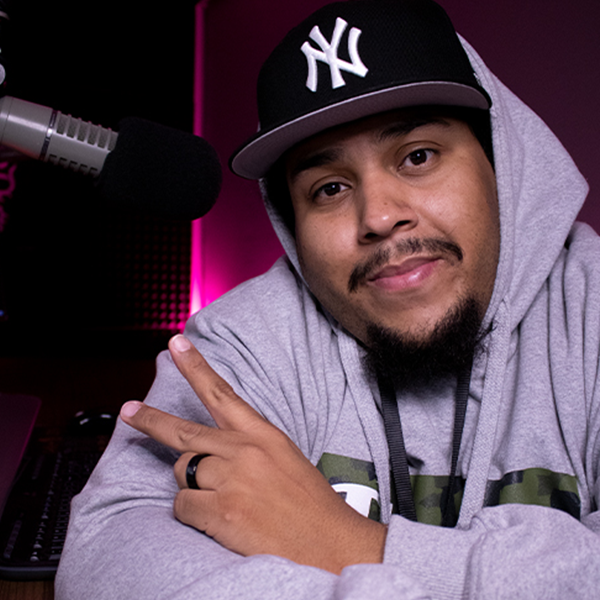 Being named “The Peoples Champ” Dre-Rawka is definitely that. For more than 10 years Dre has been involved in the Salt Lake community rather if it’s delivering turkeys and gifts for families in need during the holidays or providing entertainment, Dre has been consistent. Hosting shows around the valley at a young age Dre found his voice by being authentic, honest, and humble.

Make sure to check out Dre’s “All Rawk” YouTube channel. LP is a proud single Mother to an incredible son. She is also a First Generation Peruvian Immigrant. She was born and raised in Salt Lake City. In her early years, she became heavily involved in music from playing the Violin for a decade, to performing on stages around Utah. She now finds great joy in continuing her passion for music on the radio, public speaking, and making others laugh through her social media platforms.

LP spends her free time volunteering in her community with multiple foundations. Spreading empowerment, education, and more. If you see her around the city don’t hesitate to say hi! Her fiery, and optimistic personality is contagious and she loves meeting others. Music has healing powers for us all and she wants to spread that magic to others for as long as she can. Moving from Missouri to Utah, Bangarang has become one of the most respected entertainers in Salt Lake City. Music and Pop Culture is Bangarang’s forté and it shows.

You can find Bang everywhere. Whether it’s your local food spot, clothing store, or maybe it’s your local music venue, Bangarang will be there. Living in Salt Lake City for the past 10 years has energized Bangarang and made him feel that he is one of Utah’s own. Back in 2000, Jake Stone walked into the old radio studios on 3300 South as a high school kid and somehow still hasn’t been fired two decades later.

When he’s not on the radio you can find him production managing concerts for everyone from Post Malone to Snoop Dogg, event managing for Real Salt Lake, or giving unsolicited Vegas History tours on the Las Vegas Strip at 3AM.

To Top
Image Suggested dimensions: 490 × 200 Body Footer Sign up success message Pop-up Form Copy/paste onto your site After you embed the code to your site, any changes you make to your form can be published directly from the editor.